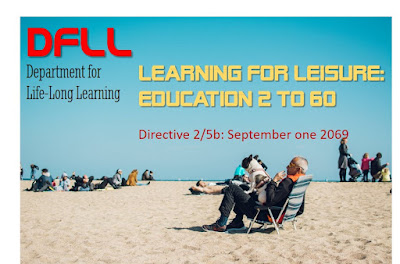 Since the election in May, the new government has not been slow to follow up on the list of promises in the King’s speech.  Many plans appeared to be very short on detail and it is now becoming apparent why. The vague statement “there will be more support for life-long learning” has materialised as a radical plan that has shocked the nation and many insiders alike today.

The plan to make education compulsory to the age of sixty was not expected and would seem to impose a heavy burden on the Higher Education system that is already reeling from the savage cuts of the previous administration.
Re-education Minister in the Department for Life-Long Learning, Karl Corbyn Junior III (42, no relation to the record shortest term in office Prime Minister of 2019) indicated that the leisure-time directive of WECS (Western European Confederation of States) was to blame: “Since the imposition of a maximum working week of 20 hours, we have seen the country crushed by excessive boredom. I have never had a proper job and I entered politics simply to find something to do. This progressive move will galvanise the country to leading more interesting and productive lives”.

Prime Minister Margaret May (53, no relation to the celebrated 20th Century rock guitarist) supported the Re-Education Minister with a statement from Downing Street: “We will all have to muck in and even I will be taking up a course in crop circle design during the coming months”.
It seems that Dublin (Headquarters of WECS) has not responded positively. A spokesperson said “Employers in England have allowed the leisure-time directive to be breached on many occasions through exploiting the ‘implied consent’ loophole. Now a basic human right of freedom to do nothing will be trampled on.”
The Government plans to strictly impose the  'Leisure Time Directive' from Dublin and release more time for people to retrain and study. All citizens below the age of sixty will have to study for a minimum of 20 hours per week. However, expectant mothers and those with children below the school age of two will be exempt.

A shortage of skilled labour is the motivation behind the move and this is not confined to England. Skill shortages are common across the twelve states of the Confederation. This is acknowledged as blunting the competitive edge of the Confederate States to a large degree. However, employers and unions alike are sceptical that the move will work.

TUC General Secretary James Reid (55) indicated that more leisure time was hard fought for from the late 20th century, “This move is designed to impose unrealistic burdens upon our members who already work too hard.  Most employers expect employees to work longer hours with little or no extra pay through misuse of the ‘implied consent’ rule. This leaves many of our members fearing a loss of income if they do not comply”.
The burden that will be placed upon the universities has also had a mixed reception. The Alliance of Independent Providers welcomed the move and a spokesperson stated that “We will be well placed to fully exploit the opportunities that this directive will offer”. However, in a statement from the sixty two members of the Russell Group of Providers, it was condemned as “Pie in the sky…. This move will distract us from our primary mission of research and overload our already burgeoning  classrooms”.
The CEO of the Higher Education Providers Union, Sally Forth, also condemned the move as not well thought through and said that “Academic staff in England are exempt from the leisure time directive and most work well over twenty hours per week already. They and their families will be the big losers in this unless funds for more staff are found”.
The Union of British Industry issued a formal statement through its CEO, Richard Head, “Whilst we broadly welcome the move to make employees use their leisure time in gainful education, we expect to have more input into determining the skills needed. There is no sense in training people in crop circle design or other such pursuits that do not strategically benefit the economy”.
We asked Karl Corbyn Junior III if there were any plans for the Office for Learner Provision, the regulator for Higher Education, to impose targets on the providers in subject areas associated with skill shortages. We also asked him if individuals would be compelled to study specific subjects and who would pay for the expansion in provision.  He declined to respond.