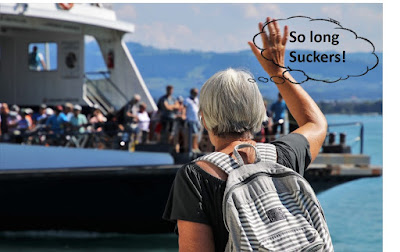 This week saw the final repayment of a student loan by a former student who graduated fifty years ago in 2020. This makes her the oldest student to date to finally pay off the student loan. We caught up with her as she waved off another boatload of tourists for the ‘Monster Loch Experience’ tour on Loch Ness. Her role as a tour guide is the most recent of a series of temporary and part-time jobs that she has had in a long career. Now eighty seven years old, she shows no sign of stopping work. Ivana Mooretyme graduated as a mature student of Media Studies at the age of thirty seven back in 2020. By then she had three children, Annie, Justin and Lottie.

The ‘incident’ coincided with her graduation and negative inflation at that time meant that her pay looked unlikely to advance in the near future. She told us that she had accumulated over £57,000 in debt for maintenance loans and fees during her time as a student. “Even then I had to work 20 or so hours a week in a cinema to make ends meet”. Her passion for films and theatre was evident and she clearly likes working with the public. However, she said that she never expected to pay off the full loan as the government said it would right-off all of the loans and had even reduced this to 20 years. “The loan book was sold to a private company, Coylock Lifelong Investments, in 2026 and I did not expect them to keep coming after me” she said.

Unfortunately the ‘incident’ of 2019 and the following financial crisis meant that by 2027 the minority Socialist Conservative United Momentum (SCUM) government had reversed its decision on all loans. They all had to be paid in full within the life-time of the student. This came as a significant blow to Ivana as she planned for retirement.

We asked her if the Media Studies degree had been worth it overall and had it helped in her prospects. She said, “I enjoyed my time at uni but it was a struggle with the kids in tow. As for jobs, I continued working part-time doing front of house in the cinema until it closed in 2030. After that I was unemployed for a time. Then I had various jobs including working abroad as a tour guide in Brussels. But all the time the loan company was sending threatening emails and making phone calls. On one occasion I was met at the ferry port by one of their officials who made me pay there and then by credit card. It was very scary”

We asked why she was still paying off the debt so late in her life. She said, “I slipped in and out of the country for several “seasonal jobs” helping various small import companies and for a while they lost track of me. I had to keep the work low key you know”.

Eventually she decided to settle back in the Former UK States (FUKS) but still had to work. The loan repayments continued but the accumulated interest and penalties for late and non-payment had added to the burden.

Then she added a surprise. “This morning I received an email from Coylock Lifelong Investments. They appear to have miscalculated the repayments.”

She showed us the communication that held the surprise.

Unfortunately we have found a discrepancy in our calculations dating back to the transfer from £FUK currency to the universal Bitcoin currency in 2032. The correct currency exchange rate was not used by the Coylock management in place then. An inquiry by the new FUKS government carried out since last May has concluded that a major fraud had been perpetrated. The news will appear in the media soon, but we have decided to contact you in advance of this. It appears that you have overpaid your student loan repayments by 32,456₿. We enclose a non-liability agreement for you to sign and ask you to indicate which account you would like the back payment to be credited to. Please respond within five days.

"Things are finally looking up" she said wearily.