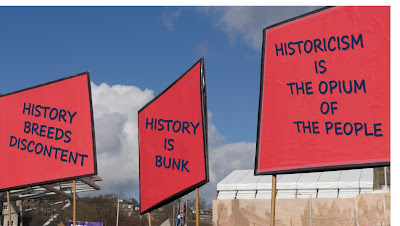 Anti-history activists from ‘Existentialists Now’ and 'Forget' target a meeting of historians.

What was thought to be a well-guarded secret at the University of Middle England this week descended into further farce and chaotic scenes. Travelling from Berlin by airship to the giant Midland Air Hub in Brinklow nearby, I arrived earlier in the day and went along to see what was happening.
Historians meet to debate marking the end of the 'incident'

Since early last year, a group of leading Former UK States (FUKS) academic historians has been debating how the events of fifty years ago should be marked.  What has become known as the ‘incident’ over the years had its 50th Anniversary last year but there was little comment and no event to mark it. The election of Margaret May’s SCAM (Socialist Conservative Alliance Movement) government in a landslide victory in May blocked out any thoughts of a painful past as optimism came to the fore. The ‘incident’ is rarely discussed in polite circles and most of the government papers from the time are unseen and remain locked away. Yet many of the historians attending wish to reflect on those times and express concerns that we may not have learned enough about the causes leading to such turbulent times. They insist that the ‘incident’ was not the cause of the problems but only the symptom of a wider problem.
With the 50th anniversary now passed, the historians decided to arrange a summit with the intention of proposing an event to mark the end of the ‘incident’. The issue of what happened and its impact is still a taboo subject and it was hoped that the meeting would pass off in secret.  In the end, this was not to be and news soon leaked out. Disagreements about when the incident actually finished marred the preparations. Apparently, a leading scholar of Irish History, Professor Ash Phoenix, of the Republican University of Belfast was excluded. His recent book ‘Irish Look Back in Anger’ proposed that the ‘incident’ was still with us and would never go away. He says it was always there in latent form and always will be.
Anti-history protest disrupts the meeting
The academics arrived at the main campus that consists of clusters of PortaKabins and a temporary conference centre hastily constructed from an old industrial warehouse. Many of the buildings on the campus were badly damaged in the Christmas party riots last year (see Timeline 2069 Sunday December twenty two 2069 'University of Middle England Cancels Christmas after riotous party'.)

They were met by several hundred noisy protesters trying to disrupt the meeting. Many appeared to be from the organisation ‘Existentialists Now’ that seeks to abolish the study of history in all schools and universities.  Some say that their elusive leader, Kirk Haggard, does not actually exist. There also were  a few protesters from the radical ‘incident denier’ group called ‘Forget’. Their spokesperson, Dr Dai Irving claims that the incident never happened and that the reports are all fabricated to instil fear and ensure meek compliance of the people. They also insist that the government papers from that time remain secret simply because nothing happened.
Historians on the other hand fear that too much ‘false news’ and misreported ‘facts’ are concealing up an important time in our recent history.  Banners and flags with slogans such as ‘History is Bunk’ and ‘Ban History’ only confirm the dangers lurking in our society that has developed mass amnesia.
A counter protest by a handful of history students tried to make their point heard. One shouted “History must not repeat itself”. In unison the protestors shouted back “Pardon!”  This was followed by the student’s louder call “History must not repeat itself!”.  After three more cycles of pardons and calls, the student finally gave up trying.
Time to reflect perhaps?
I spoke later to Professor Herbie Wells of the Historical Society of FUKS as he pushed his way out through the crowd. He indicated that we “must not try to relive history but instead look to the future from a perspective of where we came from. We need to live the future but remember the past. We must always travel into our futures together knowing where we started from.” I also managed to get the views of the CEO of The University of Middle England, Virginia Fox. As usual she was ready with an enigmatic and obscure response “I can only note that the past is beautiful. What is amusing now had to be taken in desperate earnest once.”
I spoke to one young protester who was holding a banner with the slogan ‘History Breeds Discontent’. She said “There is too much looking backwards. Analysing our history is sapping our confidence and depressing everyone. Our generation needs to be positive and bold and only look ahead. After all, the future belongs to us”.
I turned and walked away thinking that history is surely repeating itself. In the distance I thought I heard someone shout “Pardon!”
Walter Hess. Timeline’s Western European Confederation reporter based in Berlin.