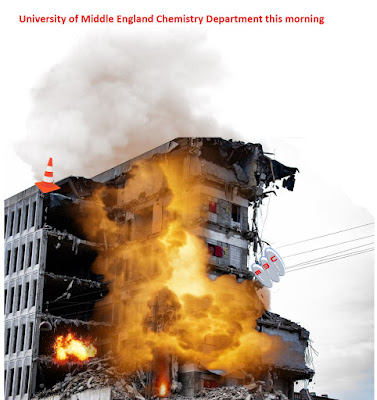 The University of Middle England (UME) campus saw more controversy yesterday when it was thrown into chaos as its traditional Christmas party spiralled out of control. Riot police were deployed throughout the night.

CEO of the University, Virginia Fox said “To enjoy freedom we have to control ourselves. Unfortunately any sense of control was totally missing last night”. Speaking from behind her dark glasses, and sporting a large bruise on her cheek, she wavered as she explained “The older one grows, the more one likes indecency. However, last night was going too far even for me. I have issued a warning to all staff and students today. Christmas is cancelled and everyone must be available first thing tomorrow morning to help with the clean-up. There are no exceptions. Everyone must work on Christmas day or leave the university”

The details of what happened are sketchy at this stage, but the evidence of considerable destruction around the central campus area is all too clearly visible in the sunshine of a crisp December morning.

I am standing in the central administration building overlooking what is now an eerily quite campus. A few stray dogs have just passed but no human beings can be seen. I am looking through shattered windows onto the smouldering remains of a burned out ambulance with its contents strewn along the main drag. However, it is not so out of place next to dozens of damaged cars, one ‘Autonomous Toiletmobile’ or ATM, that is still burning and the overturned section of a city tram that is inexplicably over a mile from its tram line on the other side of the campus.

Many of the buildings are badly damaged and an explosion seems to have destroyed the east wing of the Chemistry department that is still on fire. Other buildings suffered less damage as the main doors are still secured with heavy chains. The Philosophy Department is mostly a shell with books and computers scattered around; apparently having been ejected from windows on the upper floors. I can hear fire alarms and flashing lights sounding in the Engineering Block in the distance. But the four fire appliances outside do not appear to be doing anything as smoke rises from the roof area. For those old enough to have painful memories, it resembles the scenes seen across our cities late in 2019 after the ‘incident’.

I asked this question of several staff and students who I found nursing bruises and hangovers amongst the destruction of the main social and recreation building that is opposite the administration building. Its 1920s Art Deco style façade is blackened by smoke and looks like a scene from war torn Europe in 1945. One Humanities staff member, celebrated historian Professor Sarah Conor said that the traditional Christmas party had started normally “It has a reputation for being rowdy when students and staff alike let off steam for a few hours. But after about nine pm it seemed to escalate into sheer madness. I certainly didn't see this coming”

Security manager Arnie Blackfield-Worker said “We took the usual precaution of locking and chaining most of the main buildings to contain the festivities to the central area only”. Blackfield- Worker, an impressively large man dressed in a black leather jacket and sporting cool sunglasses, stressed that his security detail was very tough and experienced along with the fearsome Hologuards deployed last night. Suddenly, he took a call on his cell and growled with disapproval “I eat students for breakfast. And right now, I’m very hungry!” before setting off on a vintage motorbike shouting to us “Hasta la vista, I’ll be back”.

The origins of the party.

Some students explained that holding a large party before Christmas was the brainchild of Professor Helmut Kabbagekopf. Unfortunately he was not available for comment as he was last seen running naked through the city streets being chased by a drone controlled Hologuard in the form of a grenadier guard in full dress uniform.

The students explained that he was originally from the University of Lederhose in Bavaria and had started as a junior lecturer in UME twenty years ago. He immediately suggested a morale boosting party for all on campus. This was to be modelled on similar campus parties that had been a tradition for well over one hundred years in Germany. To cater for over 30,000 students and staff, a large catering and drinks operation had to be planned months in advance. The first party, held in December 2049, was a huge success. Empty glasses were sold with books of tickets to bypass the strict FUKS laws on the sale of alcohol. These were exchanged for refills from a large supply of beer barrels or lagers by willing volunteers. Ample food and snacks made by the students and staff themselves were supplied throughout the evening for free. The parties since then have been rowdy and loud but until yesterday they had also been good natured.

One  plausible rumour about the cause is circulating.

Some students from the Media and Technology department said that they had seen their former lecturer, Prof Brainie Koks, at the party handing out home-made mince pies. He had recently been dismissed for refusing to supply ‘cookies’ for his class at a student teaching evaluation (Reported by Timeline 2069. Sunday December eight 2069 ‘Uproar at University of Middle England as lecturer is sacked for refusing to produce ‘cookies’ at traditional student teaching evaluation’). One said, “We are convinced that he has got his own back by lacing the mince pies with MDPV. We all saw him putting several plastic bags containing a white powder in his car when he left the campus".

MDPV (methylenedioxypyrovalerone) is a powerful stimulant that used to be called ‘monkey dust’ before it was totally banned in 2020. Mixed with alcohol, it causes people to believe they are super strong and induces a state of uninhibited destructive madness. This theory has gained some credence as the normally timid professor of philosophy, Fred Nitshite was seen at around eleven pm scaling the outside of the Life Sciences Tower shouting “Come out and fight if you think you’re clever enough!” He seemed to be addressing Biochemistry lecturer, Professor Bruce Wainson who was hanging upside down from an upper window in full academic dress screaming that he was batman.

Whatever the cause, there is no doubt that something extraordinary happened at UME last night. A large number of party goers had spread out from the party intent on destroying everything in their path. By midnight there was a state of emergency and the army was put on standby as riot police cordoned off the campus and moved in. But this was only after buildings were damaged and many cars, buses, an ATM, tram and an ambulance were hijacked and destroyed. The University will have to do more than just ‘cancel Christmas’ to restore its tarnished reputation.

By our war correspondent Oily Gearstick.