Uproar at University of Middle England as lecturer is sacked for refusing to produce ‘cookies’ at traditional student teaching evaluation.

There was confusion and uproar on the campus of the University of Middle England today as news filtered out that a lecturer had been sacked for refusing to produce ‘cookies’ for his class in the annual Christmas student teaching evaluations. Media and Technology lecturer, Professor Brainie Koks, originally from Moddergat in the Netherlands, said that he had just been informed of his dismissal on the grounds that he was “Not willing to engage with students in the spirt and traditions of the university”.

CEO of the University, Virginia Fox, released a statement today that confirmed the decision.

“Professor Koks was dismissed today after a meeting with our disciplinary panel that concluded that he was no longer willing to engage positively with his students. The long-standing tradition of the university has been for academic staff to provide various confections prior to all student evaluations of staff performance and student surveys. Failure to comply represents a determination to lower the reputation of the university. It is unfortunate that someone has to 'die' in order that the rest of us should value 'life' more”.

Meanwhile Professor Koks has hit out strongly at the charge, “I have worked hard with my students on difficult topics and have reached the conclusion that my teaching should not be measured by the quality of my ‘cookies’. This tradition has perverted standards with a false competition amongst staff to produce the best cookies.”

One student, who wished to remain anonymous, said “we were all shocked when the professor turned up without biscuits and then provided convincing evidence of its perverse effects with figures from an old study. It was always a great event before Christmas and we were disappointed. However, he is a great lecturer and we respect his principled stand. So we all gave him extra marks for being so honest with us”.

A former student observed "He always made his own cookies in his lab and to be honest they were usually terrible and I swear they tasted of chloroform. We used to pretend to eat them and bin them outside"

A tradition in question.

The tradition of staff providing ‘cookies’ for their students before surveys of teaching evaluation stretches back many years and is now normal practice at most of our universities. It has its roots in a study back in 2018 ‘Teachers who give cookie rewards score better in evaluations’. The positive impact of ‘cookies’ on evaluations was significant. Many more lecturers started using the inducement and it was an ad hoc arrangement for many years afterwards. It was only when data from a large study, involving over 22,000 students and 300 classes across the Alliance of Independent Provider (AIP) universities in 2031, was released that the practice became more formal and widespread. This was particularly important in the run up to Christmas near the end of classes in the first semester. The study’s report, ‘The application of confectionary based inducements to student evaluations of teaching’ revealed some surprising results *. There appeared to be a very significant advantage to producing the aptly named ‘Jammy Dodgers’ in preference to other types of biscuit or ‘cookie’. (Figure 1) 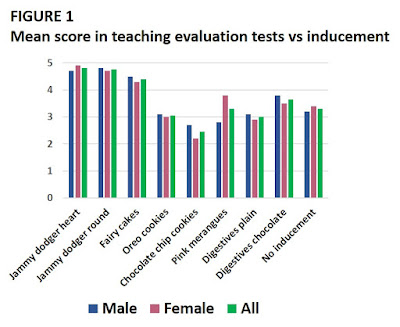 The heart shaped ones were marginally more effective with female students than the round ones that were more favoured by male students. Although carried out in the run up to Christmas, mince pies were excluded from the study. This was due to confusion amongst vegan students that they might actually contain mince meat. Indeed, present day ‘mince pies' normally do contain mince meat. Results from Scotland using Tunnocks tea cakes and ‘snowballs’ were excluded on the grounds that they were not readily available outside of Scotland.

Despite its popularity, the practice has been challenged over the years and many universities have now adopted formal guidelines for their staff. However, competition to produce the most popular ‘cookies’ has continued to be intense. The use of professional confectioners or ‘homemade’ cakes provided by grandparents has been discouraged. One incidence of providing ‘special cookies' laced with synthetic cannabis at the start of a lecture raised more serious concerns back in 2042 and this practice is explicitly banned on most campuses. Also in 2042, the race to produce ever more elaborate confections had reached its zenith with the release of the ‘World University Cookie Rankings’. However, the discovery of psychoactive chemicals being incorporated in some ‘cookies’ led to suspension of the rankings indefinitely.


* ‘The application of confectionary based inducements to student evaluations of teaching’ report of 2031, published by the AIP Press, is no longer available. We managed to get an exclusive copy from an unnamed lecturer at the University of Middle England.

By our cooking correspondent Mary Raspberry.