The Sun Higher Education University Rankings Out Today: The WACKIE races are back in town. SHARE IF YOU DARE!

Sunday September twenty nine 2069
The Sun Group Newspapers in the UK and Sun Higher Education (SHE) has published the most comprehensive world university rankings for the last 20 years and its evaluations are eagerly anticipated every year. The World Academic Combined Key Information Evaluations, dubbed the WACKIE races by most academics, has been no exception this year. Evidence that some proxy measurements can predict final rankings has mounted over the last ten years, however this time it is not so clear cut.


Who is gaining ground and who is losing?
The dominance of universities in China and South East Asia for the past 20 years seems to be waning. The University of Beijing still heads the overall league table but others have dropped to below 10th position. Universities from India are closing in fast in the overall rankings with the University of the Punjab leading in 5th place and 12 others are in the top 40. Close behind comes the universities in the Former UK States (FUKS) and Ireland. Cambridge and Oxford Universities still lead the FUKS in positions 31 and 32 and all 62 of the Russell Provider Group (RPG) of universities are in the top 500 places. Six universities from the Alliance of Independent Providers (AIP) are also listed in the top 200 with the highest ranked being the University of Middle England in front at position 153. The big losers again this year have been universities in the American Confederate States and the American Union States.  No university from these jurisdictions made the top 100 for the first time ever. In contrast, universities in the American Western States Alliance (North Mexico, and the expanded states of California and Arizona) fared much better. The universities of Tuscon and Nogales lead the way on 49 and 50 with Stanford close behind and in at 62.
This decline appears to have its roots in events following the ‘incident’ in 2019. The subsequent breakup of the USA after the third term of the Donald Trump presidency was accompanied by increasing world isolation. The decline in the Liberal minded universities in the Union States was particularly sharp whilst Mexican institutions advanced quickly by mirroring their neighbour’s education system at lower cost.
Methodology.
The rankings are based upon an overall score of 100 that is scaled to four decimal places.  The algorithm is now massive since the introduction of Low Energy Data (LED) Balloon memory storage technology and the new organic supercomputers over ten years ago.  Since then, every action can be tracked easily. Every conceivable data item is fed into the algorithm to generate the final score. This includes publications, peer review assessments, citations and impact by Eigen scores, student numbers and adjusted assignment exam results. External examiner scores are entered using the Universal Score Evaluation (USE) from the Local Evaluation Scoring System  (LESS) in place in every university. The earnings and jobs of all graduates have been tracked for the last 20 years and these are included. Greater weight is put on student scores, earnings and jobs followed by impact and scope of publications. This includes publications not peer reviewed but published online by licensed web sites. Although the reputation survey continues to be used, this is only as a comparator check. The numbers of students and staff and their purchasing power has been tracked for the past ten years and this has thrown up some interesting comparative data.
Universal trading data used to the full.
Since the conversion of every single trade in goods and services was converted to universal electronic currency, recorded in bitcoins as the world currency, in 2057, governments have been able to track their economies on a daily basis. The Office for National Data in the FUKS has used its organic super computer (dubbed ‘Two Brains’) in Birmingham with the revolutionary LED ‘Balloon’ data banks to track every trend and produce a report at 6pm every day. Whilst this has revolutionised our understanding of microeconomics it has led some to manipulate markets in increasingly bizarre ways. The WACKIE rankings have been able to track some of these trends across university campuses with remarkable results.
The Avocado economy.
SHE has developed sophisticated tools to track sales of goods on every university campus across the world in an effort to find suitable proxies for the university quality rankings in WACKIE. This is an attempt to spot trends in university performance in advance. For example, increased purchasing of unusual radioactive isotopes might indicate the early stages of novel atomic research.  In most cases, the comparisons failed to correlate well and seemed chaotic. However, one very surprising trend came to light in data from the FUKS Universities and Ireland when comparisons were first made in 2059. 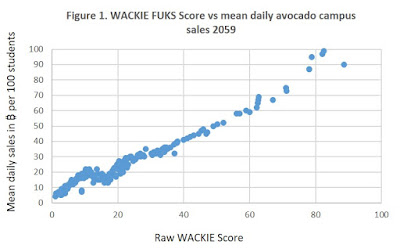 In tracking the daily purchasing trends it became clear that there was a distinct variation and pattern in the purchase of avocados and related products. A similar trend was seen in the American Union States but not in the American Confederate or the Western Alliance states, where chilli sales showed a closer correlation. This led to the hypothesis that vegetable sales would be used as proxy measures to predict university ranking and quality.
Figure 1 shows the WACKIE university scores for the FUKS and Ireland in 2059 v the mean daily avocado sales on campus. The correlation is striking and clear.
Manipulation of the market.
The same analysis of avocado sales in the FUKS and Ireland universities has been carried out for the 2069 rankings. Figure 2 shows that a similar trend to 2059 exists but that some universities now show up as outliers. 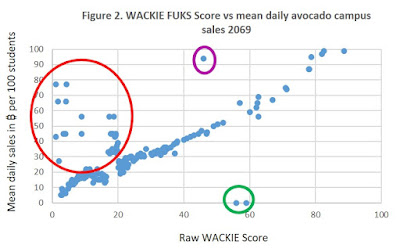 Two Universities in Ireland have dropped out of the avocado market due to a student boycott and protests. Students from the Republican University Belfast and Trinity College Dublin (ringed in green) started boycotting Avocados 18 months ago and this appears to have been successful. A student activist from Belfast said that “Avocados are a symbol of middle class British arrogance and imperial power and we will have nothing to do with them”. Another student from Dublin, campaigning for healthier diets, indicated that they were “too expensive and there were better healthy foods available”. The rapid advance of some of the lower ranked AIP universities  (ringed in red and purple for the University of Middle England) in the avocado stakes appears suspicious. Some of these institutions are lower ranked but have large avocado sales.
Our investigation has uncovered that these universities offer vouchers for free avocados to all new students and record these as sales. They also offer a wide variety of avocado products including a very popular guacamole. Looking closely at the ingredients we see that it contains an infusion of SKA (Synthetic Kannabis Analogue). Although legal, this substance can be mildly addictive and should be used more responsibly. We sought a response from Virginia Fox, The CEO of the University of Middle England (ringed in purple) and she indicated she had no knowledge of this but that “our students are very happy and this is surely a good thing”. Their new slogan for the 2069 intake is “Be higher with us in the world rankings and be happy”.
The previous government also appears to have played a hand in the manipulation of the avocado market. The departing prime minister, Norman Larage refused to comment. As leader of the FUKS Isolation Party, he promoted FUKS goods over imported goods.  However, we have uncovered that, with his education minister Ronnie Robinson, they both have a major stake in Scottish avocado production in ‘Avocado Glen’ in the borders.  Ronnie Robinson was previously the Isolation Secretary of State and had slapped very high tariffs on avocado imports from the three American jurisdictions.
The current re-education minister, Karl Corbyn Junior III, said that “Larage and his rabid acolytes have had their day and things will change. Everyone, rich or poor, should have the right to consume avocado”.
Comment from the WACKIE rankings editor: SHE says “Give my head peace”.
SHE WACKIE Correspondent, Dympna R H Luke