Technology impacts with reality when ‘legless’ passenger is ‘ejected’ from driverless Edinburgh bus. 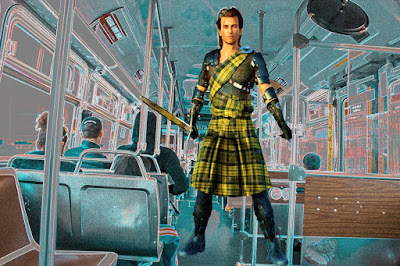 In the early hours of Saturday morning, a series of unintended incidents occurred in Edinburgh City Centre when two technologies interacted with each other and failed to recognise reality. It all happened because the ‘Hologuard’ security technology deployed on a driverless bus interacted with evolving human behaviour.

At  around 1.30am, a twenty nine year old man was somehow propelled from the driverless bus which then collided with a traffic island before continuing into the side of an autonomous tram. Fortunately the man only suffered minor abrasions.
A fellow passenger said, “We were all a wee bit fou and merry, but we got fearty when a numpty highlender suddenly appeared and started a stramash wi us at the back o the bus. He hod a claymere an all that and shouted for us to sit down and shut up or “I’ll gi ye freedem”. I would recognise him anywhere”. Others confirmed that, in the “stramash” that followed, their friend, Wee Tam, rushed the highlander shouting “I’ll see you pal” before the highlander shoved Tam off the bus. After that, things became very confused. Other passengers confirmed that Wee Tam was “steamin and legless” as he accidently stumbled toward the emergency door and pulled the handle to steady himself. It was then he managed to propel himself out onto the cobbled street. The driverless bus immediately applied its automatic emergency brakes and the bus skidded on the wet cobbles. These had been laid recently by the council to recreate authentic 19th century street scenes. The bus then collided with a traffic island before coming to a halt imbedded in the side of a driverless FART tram that was derailed as a result. The police confirmed that reports were received around 1.30am of a man in highland dress running amok on a bus and responded within four minutes to be met by chaos. A police officer at the scene indicated that the man in highland dress was nowhere to be seen and had not been picked up by nearby cameras or drone patrols.


Too much technology.
The Forth Area Rapid Transit (FART) system had only last week introduced realistic hologram guards (called Hologuards) on buses and trams at night.  A FART representative confirmed that there had been a rise in incidents of rowdy and drunken behaviour on their system in the run up to Christmas last year. This year they were determined to put a stop to it. She said that “some people think they can misbehave and upset other passengers simply because there is no driver”.  She confirmed that the first driverless buses in the Former UK States were rolled out in Edinburgh as far back as 2021. They have been in use for many years with very few problems. It seems that the upsurge in incidents of groups of drunken partygoers, wearing outlandish disguises to evade recognition by on-board cameras, is a more recent phenomenon. Those on the bus might have mistaken the would-be ‘guard’ for another party-goer.


New uses for VHS technologies.
The hologram technology introduced to the FART system last week was invented 20 years ago by scientists at Dunedin University in Edinburgh. Called the ultra-compression Virtual Hologram System (VHS), it was originally intended to be used to transmit live lectures to students.  But wider uses for the highly adaptable technology have emerged since.  The police in Edinburgh have used hologram images of officers, beamed from their drones regularly on patrol in the city, to deter trouble makers for the last five years.  As for the 'Hologuards' used in the FART system from last week, the transmissions are controlled by an operative back at a control centre. A police spokesperson told us, “In 2018 before the incident, we put cardboard cut-out officers on street corners but they were always stolen. We have come a long way and now we can observe and deploy realistic officers that reassure the public they are safe at night”.
FART spokesperson, Drew Shortstraw, issued a statement earlier this morning:  “Clearly the interaction of the autonomous bus technology with our Hologuard has had unintended consequences. I would like to reassure the public that lessons have been learned. Our publicity about the new Hologuard system did not reach everyone and we apologise to those passengers frightened by the fearsome highlander that confronted them suddenly last night. Our intention was to bring order to the back of the bus but it obviously got out of hand. The operative controlling the system on the night will be retrained in customer relations and we will not be using a ‘highlander guard’ armed with a claymore in future”


Additional note: Timeline 2069 has learned that 263 claims by ‘passengers’ on the bus for whiplash injury have been made in the last 24 hours. The official capacity of the bus is 42 passengers.


By our technology correspondent: Ronnie Geeklan-Jones