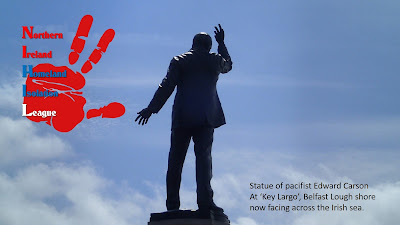 Over the coming weeks, Timeline 2069 will publish a series of articles that examine the situation in the various Former UK States as a result of the major government changes coming down the line. The election in May, that swept the SCAM (Socialist Conservative Alliance Movement) Party to power across the FUKS, brought the situation in Northern Ireland into sharper focus.  Higher Education there is vulnerable to the whims of a government that is increasingly isolated from the rest of the FUKS; indeed the WECs (Western European Confederation) and the rest of the world. In contrast, both universities are striving to maintain links outside of Northern Ireland in an increasingly difficult environment.  The history of recent years is one of wasted opportunities.
Power struggle.
The overtly nationalist Sein Fein Party broke the political deadlock after the ‘incident’ of 2019 and formed a majority government by a small margin. Similar advances in Ireland to the south failed to materialise as an overall majority and the two main opposing parties, Fianna Fáil and Fine Gael agreed a permanent merger to form what is now known as the Hibernian Equality National Party. They gained in popularity and strength under the populist banner of the HEN Party. They also forged close links in policy with the newly emerging SCUM (Socialist Conservative United Momentum) party in the FUKS that was itself a merger of the older Labour Party and the Conservative party. The main thing that each had in common was an opposition to extreme nationalism. Working together, they forged closer links with the Western Europe Confederation of States the eventually emerged as a new trading bloc in 2036 with Dublin as its headquarters.

National Pride before a fall.


In seizing power, Sinn Fein, were quick to capitalise on their grip in the North by renaming Queen’s University Belfast the Republican University Belfast or RUB. In the post ‘incident’ chaos this went largely unnoticed. There were some protests and scuffles but little more. The former Ulster University was also renamed the Six Counties University College, later to be renamed again as Carsonia University and expanded greatly.  But neither move changed the fortunes of either institution by much as they operated at funding levels well below their comparator universities in the FUKS and Ireland. As the Ireland economy expanded in subsequent years, and it became the wealthiest nation on earth measured as GDP per person, Northern Ireland slipped back.  The failure of the Sinn Fein government came as no surprise at the election in 2026.  No one party had a majority of over 10% and Northern Ireland operated without an effective government for the next 33 years. Then,in the 2059 election, the FUKSI (Former UK States Isolation) party led by Nigel Larage took control of the FUKS. This was only possible with the help of their sister party, the Northern Ireland Homeland Isolation League or NIHIL Party (a breakaway group from the now disbanded DUP that ruled before the ‘incident’). The newly formed NIHIL Party in Northern Ireland held the balance of power across the FUKS for the following ten years until May of this year. The reforming of the SCUM Party as the Socialist Conservative Alliance Movement or SCAM Party, provided to be a more serious opposition that swept to power earlier this year.


In taking control ten year ago, the NIHIL government immediately changed the name of the Six Counties University College to Carsonia University and also proposed to rename Northern Ireland as Carsonia. The naming idea was after the reformer and pacifist, Edward Carson,  who led Northern Ireland out of conflict in September 1912.  However, they failed in a bid to change the name of the RUB as Sinn Fein protests blockaded the institution for three weeks. The RUB then voted to split from government control and became a smaller independent private university reliant upon donations from Irish support groups in the recently constituted American Union of States. Meanwhile the NIHIL government diverted most resources into the newly named Carsonia University and promoted its expansion.


While compulsory education is to apply in the FUKS from the end of 2069, the position of Northern Ireland or Carsonia remains uncertain.  The HEN Party government in Ireland has agreed to join the SCAM government in the FUKS by initiating a similar scheme in Ireland.  However, the NIHIL government has remained silent.  Officials at the RUB have however been quick to react.  The CEO, Douglas Adams and his deputy, Wes Maguinness, issued a joint statement today, “We have been preparing plans to found satellite campuses in Ireland, Wales, Scotland and England.  The campus in England will be in the Emirates Triangle in North London. In Scotland it will be in the Hibernian quarter of North Edinburgh.  A suitable site cannot be announced for Wales at this point. In Ireland, we will partner with Maynooth Secular University to help it expand to over 50,000 students in ten years”. The move will enable students in Northern Ireland to link with the educational opportunities across the FUKS and Ireland. It will enable them to use their National Access Number or NAN in both jurisdictions; especially Ireland .


This is a bold move that has wrong footed the leadership at Carsonia University who have no particular plans to report. A spokesrobot from the NIHIL government informed us that there were no plans to expand Carsonia University further at this stage in response to the lifetime education bill as its "implementation is likely to be delayed." Interestingly, there has been no mention of changing the name of the NIHIL Party to the CHIL party.


The NIHIL government has indicated that it intends to extend its isolation policy further. Speaking to Timeline 2069 from his refurbished ‘Key Largo’ residence on the shores of Belfast Lough, First Minister, Edward G Robinson, indicated that a wall building programme for enhanced isolation would take Carsonia to the forefront of advanced physical  security technology and make it world leading. In the light of this, it would seem that the RUB will soon be in direct conflict with the government as a result of their expansionist plan.  Using the slogan ‘We ourselves’, the NIHIL manifesto promised to build a solid and permanent wall between Carsonia and Ireland and block all trade across it.  Any goods and services would have to transfer via the FUK states only.  This has serious implications for students wishing to access their NAN in Ireland. Travel to Dublin and Maynooth will be via the FUKS, meaning the Port of Cairnryan or Liverpool by sea. Or by air through the massive Midland air hub in Brinklow, Warwickshire. All official internet connections will be routed through England. In response, Republican groups have issued threats to sever the sub-sea cables in the last few days with a statement, “If they want isolation – we will give them isolation”.  In the meantime, illegal internet routers have already sprung up all along the current border and only students registered with the RUB have been provided with the access codes necessary.


It seems that where there’s a will, someone will inherit the future.