Budget 2069: Austerity+ is finally over. 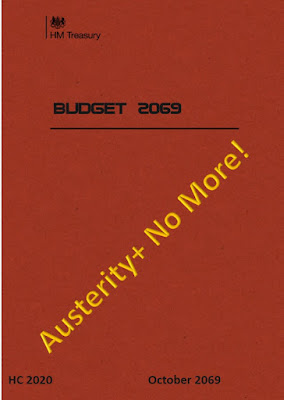 Chancellor Gracie Milton-Friedlass delivered her first budget speech this week as she outlined a massive injection of cash into the economy. To loud cheers that rang around the new Parliament House, she proudly announced that “after more than sixty years of hardship I can now say with confidence that austerity+ is finally over”. She added “After years of a failed austerity government under Norman Larage and his rabid isolationist acolytes, Social Security and the National Health Service are finally safe in our care. Everyone can look forward to a future of being secured (sic?) by a progressive SCAM Government”.

The 2069 offering is the first time since the formation of the Former UK States that a budget has been coordinated across all of the FUK States at the same time. It heralds a new era of escalating investment that will be delivered across the FUKS. Scotland Finance Minister, Adam ‘Citizen’ Smithy, hailed it as a triumph of "friendship and understanding". The Wales Finance Minister, Vincent Jones, agreed that there “should be cooperation for years to come with this ambitious SCAM government”. We contacted Carsonia (formally Northern Ireland) First Minister, Edward G Robinson at his Key Largo Mansion near Belfast Lough but he declined to comment. Since forming the NIHIL government in May, it seems we cannot yet find a finance minister to contact. A spokesrobot from the Carsonia Finance Office said “we find the proposals interesting” but declined to comment any further. It might be that there is disappointment that the proposals for a bridge between Scotland and Carsonia have been shelved. As expected, there was also a warm response from Dublin and the General Secretary of the Western European Confederate States (WECS), Dr Dara O’Brain who said “our genuine hope is that this FUKS budget will align our neighbours more fully with the WECS economic boom and the Hibernian tiger”

Central to the budget is the plan for compulsory education from two years to sixty years for everyone. Rumours and ‘leaks’ about a reduction in funding for universities turned out to be unfounded. The ambitious comprehensive plans will include universities and will be financed through a National Access Number payment. Universities will no longer be referred to as ‘providers’. Everyone will have a National Access Number or NAN and will contribute to the fund whenever they are in paid employment. Employers were however shocked to find that they are expected to pay into the national education investment fund through a 10% charge in addition to the 32% National Insurance costs. The CEO of the Union of British Industry, Sir Richard Head, said “whilst we may benefit from improved education for all, and we all wish to support NAN, this may be a bit too much”

A home for everyone promised.

Other radical developments were also warmly received. An expansive affordable house building scheme will start as soon as possible in 2070. Called the ‘Social Housing Infrastructure Tenant Expansion’ (SHITE) scheme, it will release over four million homes for affordable rent in the next six years. Gracie Milton-Friedlass announced that “We promise that we will house every family in need of a home in SHITE housing across every local authority in the FUKS”. Much of this development will be carried out by refurbishing the thousands of derelict student accommodation blocks that were abandoned in every city after the ‘incident’ of 2019.

The budget also outlined how the abandoned HS1 project would finally be completed. Construction of the original HS1 line ceased just north of Watford junction after the ’incident’ nearly fifty years ago and it has been overgrown and in ruins ever since. Now it will be completed with a new midland terminus in the ‘Technical Hub’ City of Coventry. This will be close to the massive Midland Air Hub in Brinklow that will get a fourth runway by 2080. Autonomous cars/driverless cars (AC/DCs) and a rapid transit Maglev Area District (MAD) rail system will link this to the centre of Birmingham and other focal points in the region. A low resistance rapid vacuum-rail system called ‘Vacu-Us’ will be rolled out to replace the ageing ‘Tube’ in London. Similarly, there are plans being developed to extend the MAD transit system with HS2, HS3, HS4, HS5, HS6, HS7 and HS8. These will interconnect with super hubs in Manchester, Liverpool. Leeds, Newcastle, Glasgow, Edinburgh and Cardiff. The Chancellor deployed some levity with the slogan, “Now we can all quickly go MAD across the FUKS”. However, there will be disappointment in some quarters as this will not include Belfast in the short-term. The long-planned bridge between Scotland and Carsonia will not go ahead. Instead, under intense diplomatic pressure from the WECS Secretariat, the construction of a jointly funded tunnel between Holyhead and Dublin, to be linked to a future HS9 in Wales and cross-border HS10 to Belfast, will be explored as a better option.

The bad jokes, that have become a tradition in budgets, continued with the announcement that the public toilet service would be overhauled. “This is not a bog standard solution but a world leading high tech development that I am sure you will all be relieved to hear” was met with groans. Instead of traditional fixed-location toilets there will be investment in ‘Autonomous Toiletmobiles’ or ATMs. These are planned to serve those ‘caught short’ and will arrive in as little as four minutes in most major cities. The hope is that they will eliminate so called ‘alfresco’ urinary habits for good. However, there will be no loophole for those hoping that ATMs might serve as a low cost taxi service. Hopping in and asking a friend to call for a nearby ATM will not work. Only SOS calls will be allowed from occupied ATMs. Other calls from inside will cause the ATM to return directly to its home disposal depot to evacuate its contents.