St Patrick’s Day stunt astonishes all of the FUKS and Ireland as we are bathed in green light. 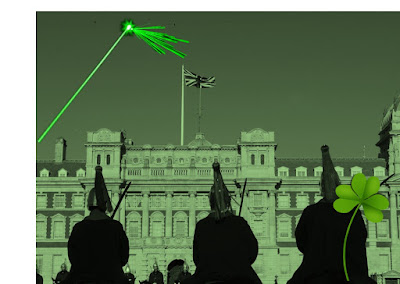 The whole of the country was suddenly bathed in a green light as the sun was setting over the FUKS (Former UK States) this evening. No it is not the ‘Day of the Triffids’ but it took some time for observers to realise it is actually St Patrick’s Day.   The astonishing sight of the whole country, from Orkney to Penzance and most of Ireland, bathed in green light has left everyone astounded.


The intensely bright green light appeared to come from one spot in the sky as it slowly moved from west to east.  Amateur astronomers quickly realised that it was one of the now defunct UK GPS satellites launched into orbit in the wake of the ‘incident’ in 2019.   The light was reflected from its large solar-panel power arrays having come from somewhere on the ground.


Students at the University of Middle England informed Timeline 2070 that they had arranged the stunt. Using an old ‘tuned down’ military-grade laser cannon, they pointed it directly at the satellite.  Originally developed as an anti-aircraft weapon it was decommissioned several years ago.


They fired the laser at one of the now defunct FUK International Navigation Geodesic satellites as it passed over the FUKS in medium earth orbit. The green light was then reflected over most of the country as a result. The FUKING satellites were part of a failed GPS system launched after the incident in 2019. They were decommissioned after the catastrophic autonomous vehicle disaster of 2042 when the FUKING GPS navigation system abruptly failed and affected nearly half a million vehicles that suddenly lost control.
A clever stunt.


The clever part was the sophisticated tracking system that locked the beam onto the moving satellite. A spokesperson, who wished to remain anonymous, said “we developed the tracking system as part of a group project and acquired the downgraded military laser canon from an old destroyer being broken up in Pensacola Naval yard in the American Confederation. The Confederate Navy kindly shipped it to us for free as long as we put it to good use”.  Some would question how a group of FUKS students acquired a military grade laser weapon so easily. But then it was all in good fun.