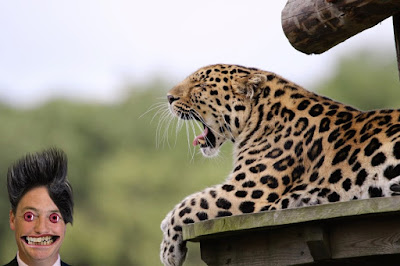 The campus of the University of Middle England (UME) was put on full alert today after a trained guard leopard attacked and mauled Norman Larage as he was being greeted by Virginia Fox, the CEO of UME. The former PM had been invited by the university to talk about the role of his FUKSIP party in advocating isolationism for the Former UK States. He is now in a stable condition at the UME University Hospital but the leopard has yet to be apprehended.


It appears that UME security has been using trained leopards to patrol the campus since the start of the year. Chief of Security, Mr Arnie Blackfield-Worker told us that the leopards were specially trained to recognise potential trouble makers, "we had a demonstration last month by the student Isolation Society who all wore Norman Larage masks to avoid identification. Masks are banned on campus and we have trained our guard leopards to recognise them as hostile."

It seems that the face of the real Norman Larage alarmed a leopard on duty as he arrived. Witnesses said that the leopard immediately pounced and mauled his unfortunate victim as he was stepping from his car to shake Virginia Fox’s hand. It took four of his bodyguards to force the Leopard away before it ran off.

CEO Virgina Fox apologised with, "We are all shocked by the scene we witnessed today and are very sorry for Mr Larage. Unfortunately we have yet to capture the miscreant leopard. It seems it is far harder to kill a leopard than a reality."

Questions are now being asked about the wisdom of training leopards to guard the campus. The students are all currently in lockdown while the leopard hunt continues. One student, who wished to remain anonymous, told us that "The big cats are so lovely and we secretly feed them jelly babies. They love them so much". However, it is ominous that the six leopards were named ‘Terminators one to six’ and it is ‘Terminator three’ that is missing. Security guards and police are searching the campus and the calls of “here Terminator, here Terminator” are echoing around the near deserted campus.

From our wildlife correspondent, Cat Weekley.