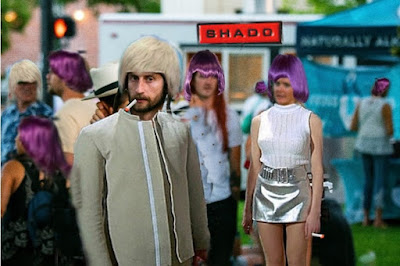 Thousands of fans are detained by police at an event to mark the 100th anniversary of the 1970 TV series ‘UFO’. Police declare there were multiple breaches of the law.

The inexplicable craze for all things to do with the old ‘British’ TV series ‘UFO’ took a further turn this weekend. An event to mark the 100th anniversary of the series, first aired on British (now Former UK States) TV in 1970, took place on the campus of the University of Middle England (UME) and attracted several thousand delegates from all over the FUKS. The event got off to a lively start on Friday evening with young students and older people alike dancing to a 1970s style disco. Thumping music from the series also rang around the hangar-like auditorium constructed since the destruction in December of last year (See Timeline 2069 ‘University of Middle England Cancels Christmas after riotous party’).
All delegates were required to wear suitable dress that was “as authentic as possible”. Indeed, all of them duly turned up in UFO clothes that made for an impressive sight. There were purple wigs, blond wigs, short silver skirts, polo-neck sweaters and silver jump suits worn inside silver bathing costumes.

Outside the venue there were several hundred noisy protesters dressed as a variety of strange alien beings. Led by UME lecturer Dr Peter Satchell, they were calling for rights for all aliens. An assortment of chants and banners proclaimed “Aliens are equals”; “Free movement for aliens”; “If you hate aliens UFO”; “My mum was an alien”.

But things started to go wrong around one am as the party was in full swing. A pile of button-up jackets dumped in one corner of the auditorium suddenly caught fire. There was some panic in the smoke as people rushed for exits, but thankfully no one was hurt. The campus fire service arrived within three minutes and extinguished the fire. However, they were not happy with the overall situation. It seems that the authentic jackets were made from illegal and highly flammable polyester. Furthermore, many delegates were smoking cigarettes as was the custom in 1970. The combination proved to be very dangerous.

Fire officer Sam Montag from Pontypandy stated that, “We were lucky tonight that no one was injured. The combination of flammable clothes and lighted cigarettes was a big problem in 1970 and still is it seems. Those wearing polyester jackets, jump suits, nylon swimwear, and nylon wigs are taking a terrible risk in a crowded venue”.

The police arrived as the smoke was cleared and suddenly started to round up several thousand revellers. They were all lined up in many long queues and detained as their clothes and wigs were confiscated. Police Commander Eddie Striker arrived and issued a stern statement at the scene, “We have taken very strict action tonight with respect to mass illegal activity. The young people here may have thought they were being clever in sourcing authentic costumes for the evening. However, they have broken several laws. All polyester and nylon was banned in 2035 as un-environmental are fossil fuel based. They are also a fire hazard as we have seen earlier. Smoking cigarettes was banned totally in 2028 and remains a serious health and fire hazard.” We were also told by the organisers that the police had tested the sound system and confiscated it as a dangerous hearing hazard. Apparently it was working at over 110 decibels at the time of the fire and playing the popular songs of 1970, Alright Now, Spirit in the Sky and Black Night.

We spoke with the organiser and UME Student President, Syd Barrett (pictured) who at first asked, “Pardon you will have to speak up. Who are you?” then “Yes, I admit it was a bit loud, but we were looking for an authentic experience. The fire was unfortunate and none of us were aware of the flammable nature of the materials”. We asked if he regretted the event and he rolled his eyes, stubbed out a strangely sweet-smelling cigarette and said “We wanted to have fun. I think young people should have a lot of fun. But I never seem to have any.” He then looked up and noticed something out of the corner of his eye before rushing off shouting “Careful with the axe Eugene!”